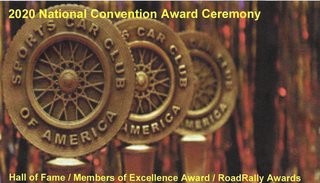 The annual SCCA convention was held in Las Vegas January 18-20, 2020 and there were numerous awards presented that are of interest to the RoadRally community.

Detroit rally legend Scott Harvey was inducted into the SCCA Hall of Fame. Scott’s storied rally career began in the 1950s and he has been extremely successful as both a rally competitor and an organizer. Here’s a link to further information.

The SCCA Member of Excellence Award was presented to Rich Bireta of the Kansas and Kansas City Regions for his innovative contribution of creating the Richta GPS Checkpoint app timing system. Selected by SCCA’s Board of Directors, this award is presented to the volunteer who shows the greatest commitment to SCCA activities. The recipient can be involved in Solo, Rally and/or Road Racing. This person personifies the SCCA volunteer who gives of his/her time and effort to help organize, work in a specialty or any volunteer role necessary to a motorsports event. This award provides a $5000 travel voucher to attend any motorsport event in the world.

The Robert V. Ridges Memorial Award was presented to Bruce Fisher of the Detroit Region for his long service in support of Road Rallies, especially for his 20 years of serving as Rallymaster for the Press On Regardless rally.

Congratulations to all the award winners, and thanks to all of the folks at SCCA for for hosting a very successful convention.