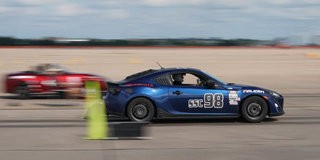 The Ladies Challenge brought 16 of the best female autocrossers from across the country into one bracket. The contest featured a wide range of cars, from karts to Corvettes and drivers from Florida to California. The seeding brought two Fletcher Cup contenders together in the third round: Annie Gill and Kate Fisher. The battle between these two West Coast drivers was close and clean, but it was Fisher who took the advantage and earned a spot in the top eliminator round of the Challenge. From the other side of the bracket, Shelly Monfort was the victor over Cindy Duncan thanks to an improbable wiggle of the last cone on course that was sure to be a penalty until it bounced right back up and helped Monfort advance to the final round. In the third-place runoff, Gill’s fate was sealed as Duncan took the win. In the Top Eliminator round, it was all Fisher, as she drove to the Ladies Challenge win and collected enough points to win the Fletcher Cup by 21 points over Gill.

In the Super Challenge, it was Kevin Dietz progressing through the ranks against the likes of Ryan Otis, Patrick Washburn, Jeff Wong and, in the final round, Rich DiMarco. Coming into competition, Dietz and Wong were two of the season points leaders for the JCJ Cup, along with Mark Scroggs who also made it to the fourth round of the Super Challenge. Then, Dietz eliminated Wong and Scroggs was eliminated by Rich DiMarco. In the final round, a spin by DiMarco closed the book on the competition and Dietz emerged victorious for both the event and the season.

In A Street, Vivek Goel looked to have the class win and points championship wrapped up heading into Sunday morning runs. Meanwhile, Josh Luster had been lurking in the weeds and pounced at the last minute, jumping ahead of Goel to take the Pro Finale class win by 0.219 second. Goel held onto the season-long points championship lead by four points over third-place event finisher, Ryan Clark. For the event, Danny Gross, Matt Jones, David White and Yury Kholondyrev claimed the fourth through seventh place trophy positions respectively.

C Street was a battle amongst ten brand new NC2 Mazda MX-5s with Darrin DiSimo and Mark Scroggs showing their strength at the front of the pack. DiSimo held the lead going into the final session, but was unable to improve, leaving the door open for Scroggs. With an improvement of almost 0.300 second, Scroggs jumped right to the lead and that was enough to take a 0.157-second margin of victory over DiSimo. Paul Frey and Ken Houseal claimed the third and fourth place trophies respectively and that’s how the class shook out in season points as all four trophy winners came into the Finale with the maximum points.

The lead in E Street bounced around between numerous drivers throughout the weekend as competition stayed tight and the top five competitors ended up within a second of the lead. On Sunday alone, the lead bounced between at least three drivers with Bartek Borowski starting out the day on top. Matt Waldbaum held the lead briefly, but Joey Green capitalized on his final runs to take the win by 0.062 second over Waldbaum. Borowski finished another 0.305 second back with Brian Tefft, Jr., Dennis Hubbard and Eric Peterson claiming the remaining trophies. That finishing order translated over to the season points as Green claimed top honors there as well.

In Oscoda, we saw the debut of Chris Delay and Patrick Washburn’s freshly-build 1999 Honda Civic. Here, it really showed its strength as the co-drivers took a 1-2 finish with Washburn taking the win by 0.203 second. Matthew Hodges was just 0.069 second behind Delay in the third and final trophy position in his Mazda Miata. In the season points, Washburn ran away with the win ahead of Andrew Pfotenhauer who finished fourth at the Finale. Hodges claimed the final trophy there as well.

Just prior to this event, several competitors decided that Tesla Model 3s were the right choice to find success in Lincoln. Laura Campbell and David Marcus showed off their new Model 3, wrapped in blue, in B Street and L2 competition. Laura acclimated to the car quickly, laying down fast times in the 14-driver L2 class. But it was Annie Gill, in a borrowed Honda Civic Si, who led from start to finish before putting on a great showing in the Ladies Challenge. Jordan Towns, Lacey Otis and Meredith Brown claimed the remaining trophies in third through fifth respectively.

Complete results from the 2019 Tire Rack SCCA ProSolo Finale can be found here.

The action in Lincoln continues Tuesday, September 3rd with the start of the 2019 Tire Rack SCCA Solo Nationals. You can find more information about that event here.