The SCCA Foundation, the 501(c)(3) charitable arm of the Sports Car Club of America which raises funds to support programs from teen driving safety to veterans in motorsports, recently received a generous donation from Ben Lambiotte: a Factory Five Racing Type 65 Daytona Coupe, which will be auctioned off in support of the SCCA Foundation’s programs. What’s more, Lambiotte made the donation in the fond memory of Wade Chamberlain, a member of SCCA’s Washington DC Region.

Chamberlain joined the SCCA in 2005 and enjoyed running a Factory Five Roadster he built himself at events prior to his passing on April 2, 2016.

“Wade was the heart and soul of our little band of irreverent homegrown Cobra racers,” Lambiotte recalls. “Fiercely competitive autocrosser, burnout champion, devious prankster, talented engineer, brewer of fine beer, inveterate DIY problem solver and loving husband and father, he was one of the finest men I ever knew, taken from us all too suddenly. He was an inspiration and an important part of the impetus for the Coupe project.”

Nicknamed the Bottom Dollar Coupe (BDC) in light of the no-expense-spared build, Lambiotte’s special car will be offered for sale at the Mecum Kissimmee auction on Saturday, Jan. 9, 2021.

Lambiotte purchased the Type 65 kit from Factory Five Racing in August of 2008. He relied on Fred Kelley of Fast Freddies’ Fabrications in Maryland for much of the meticulously executed assembly and fabrication work, along with amazing work by Larry Casey of Casey Designs on the custom dash and other components, including a pair of custom hi-flow stainless Burns side pipes boasting immaculate welds. The BDC was the test bed for many innovative parts Fred Kelley developed, including full rod-end adjustable suspension components, electro-mechanical power steering and a Lexan rear hatch. “It would still just be a big pile of very nice parts without Fast Freddie’s fabrication and Casey Design, and I am grateful and in awe of their talents to this day,” says Lambiotte.

Going from the shipping crates to the car’s first run on the street took roughly 11 months, with its official unveiling to the Factory Five fan world on July 3, 2009. Those watching the progress of the build were rewarded with photos of the completed Coupe featuring a dazzling paint job in House of Kolors custom paint for everything from primer to clear coat; the blue is Shimrin Fine Metallic Stratto Blue shot over HOK KS10 white sealer. The meatballs and stripes are Snowhite Pearl, also over white. “They look ivory from a distance, but you can see the translucent pearl up close,” explains Lambiotte.

“It’s built to spin up to a 7,500rpm redline and back down to corner entry speed, all day long,” Lambiotte points out.

The car rides on 17-inch CCW Classic three-piece race wheels, 11-inches wide in front and 12-inches wide in back. The custom power steering system makes all the difference maneuvering all that tire in small spaces. 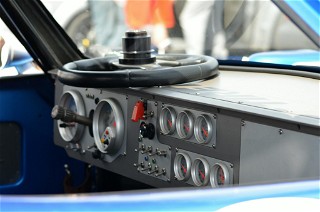 After driving it for the first time, Lambiotte attempted to describe the experience: “The sound in the cabin is unbelievable,” he had said. “It’s like being in the engine room of a dreadnought battleship. As you wind it out, you can hear the solid roller cam, rockers, and gears, all working in sweet mechanical harmony, and, above all, that lion’s roar of the exhaust.”

Lambiotte enjoyed the car on the street, at autocrosses, and at track days, often pulling a tire trailer behind the Coupe to get to events. After continuing to make improvements to the car while driving it over the next seven years, Lambiotte found that life changes were keeping him away from the track and with less time to devote to keeping the Coupe ready for action. In fact, the car sat sleeping and covered for nearly three years before he decided it was time to hand his passion project on to another driver who could appreciate it.

“Over the years I was involved in motorsports, I received great instruction, mentoring and fellowship from members of SCCA’s Washington DC Region, and saw firsthand the good work the organization did to promote safety, sportsmanship and automotive knowledge among people of all ages from all walks of life,” Lambiotte says. “I also very much appreciate SCCA’s legacy and storied role in American amateur road racing, stretching back to when open-top Cobras drifted around hay bales on makeshift tracks across the country. It is fitting that the BDC return to this fine organization a small part of the benefits I gained in my affiliation with it.”

Several individuals and companies donated generously to bring the Bottom Dollar Coupe back to life.

SCCA Foundation Chairman Jeff Jacobs drove from Philadelphia to Baltimore, Md., to pick up the car. “Even after the car sat under a cover for three years, the expense and effort Ben put into the build is evident just looking at the car,” Jacobs notes. “And while he was doubtful about the ease of getting her no-choke, carbureted race motor running again after so long, Tony Savini and I installed a new battery, poured in some fresh fuel, and with a little coaxing it sprang to life with a satisfying growl coming from the exhaust pipes.” 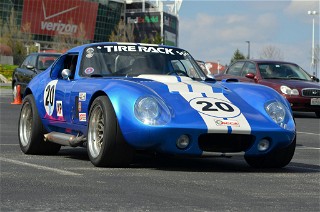 Jacobs took the car to Phoenix Performance in Phoenixville, Pa., where Joe Aquilante’s SCCA National Championship-winning race team went over all mechanical systems and fluids necessary to have the car ready for street and track use once again, at a significant cost savings on parts and labor to the SCCA Foundation.

As a longtime title sponsor of the SCCA Foundation’s teen safe driving program — TireRack.com Street Survival — Tire Rack donated a brand-new set of Toyo Proxes R888R tires for the auction winner to enjoy on the track.

With the mechanicals sound, the car underwent a full detail by Tim McNair of Grand Prix Concours in Philadelphia. McNair graciously donated his services to the SCCA Foundation, too. Ordinarily, you can find his detailing work on cars that win prestigious events such as the Pebble Beach Concours d’Elegance, Villa d’Este, Amelia Island, The Quail and many national marque-specific concours events. Vehicles prepared by McNair have been photographed in magazines such as Forza, Porsche’s Excellence, Automobile Magazine, Octane, The Rodder’s Journal, Japanese Nostalgic Car and Classic Motorsports.

The final stop in the rebirth of the Bottom Dollar Coupe will be a trip to Kissimmee, Fla., where, on Saturday, Jan. 9, 2021, it will be featured on the big stage at the televised Mecum Auction.