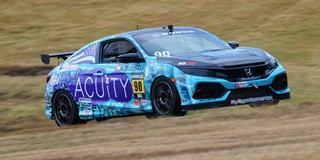 ALTON, Va. (Oct. 12, 2019) -- Kevin Boehm, of Marysville, Ohio, was the defending Super Touring® Under (STU) National Champion coming into this year’s Runoffs® at VIRginia International Raceway. And earlier this week, despite a small setback, he earned the Tire Rack Pole Award and led a 25-car field to the start.

While Boehm, driving the No. 90 HPD/Carbotech/Red Line Oil Honda Civic, bobbled a bit at the start of Saturday’s 15-lap race around VIR’s 18-turn, 3.27-mile circuit, he quickly recovered and marched away to a 25-second victory. This is Boehm’s second consecutive National Championship in the STU class, and fourth Championship overall.

“I think this is the first year everything went to plan,” said Boehm, who also set a new STU lap record during the race. “I expected Elivan to get a better start since his car is so light and so good.  But then I went to work from there. This was an absolute perfect car for this track.”

Elivan Goulart, of Shelton, Connecticut, did indeed get a great start, going side-by-side with Boehm into the second turn. But Boehm drove away at the end of the opening lap. Goulart, who experienced some car troubles later in the race, settled in and put down laps, resulting in an 8-second lead over the third-place finisher by the checkered flag.

“We had a great start and I thought that would be my only chance to get by. But we had nothing for Kevin today,” said Goulart, driver of the No. 70 Elivan Goulart Lotus Exige. “But this was a phenomenal car to drive.”

Michael Flynn, of Orlando, Florida, drove his No. 25 Irish Mikes BMW 330 to the third and final spot on the podium. The car, a gift from his wife some years ago, improved all week from qualifying to the race.

“We qualified fourth and messed around with diffs all sessions,” Flynn said after the race. “The car ran flawless, and we went faster today than we did in qualifying.”

Behind the top-three finishers, a handful of other STU competitors where having a much tighter battle.  Swapping spots for a good portion of the race were Chris Haldeman, in the No. 28 X-Factor/Sunoco/G-Loc/HPD/Hoosier Honda Civic; Paul Azan, in the No. 173 Toyomoto Sales/Hoosier BMW 330ci; David Brand, in the No. 31 Krugspeed/BGB Firm Lotus Exige; Steve Eich, in the No. 91 HART/HPD/Red Line Oil Honda Civic Si; and the No. 19 Hoosier/Carbotech/AngrySheepMSports Dodge Neon SRT-4 of Mark Liller.

Haldeman held the fourth spot for a bit, but Azan soon claimed that spot and pulled away. But about halfway through the race, Azan had a “moment” on track and the other drivers caught up. Soon after, Haldeman regained the fourth spot with Brand and Liller in tow. Then on the last lap, Liller got by Brand. So, Haldeman finished fourth and Liller fifth. The Sunoco Hard Charger award went to Christopher DeShong who started 24th and finished in the 14th position.

Live, online video coverage of Runoffs races, presented by Mazda, is available throughout the three days of competition at SCCA.com/live. An audio race call, supplied by the Super Tour Radio presented by Hoosier Racing Tire broadcast team, is also available at www.SCCA.com/live, as well as live timing and scoring for each National Championship race.