Bordeaux Back Ahead in iRacing SCCA SRF Challenge 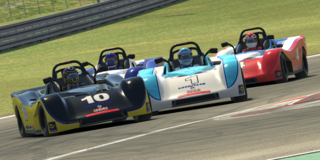 We are in familiar territory now, most of the way through the season with just a few weeks left, and where is Tommy Bordeaux? Suddenly at the top of the podium! If you remember back to last season, around this time we released an update titled “Bordeaux upsets podium”. Well, Bordeaux strikes again!

The points race has been a close one all season with just a wins-worth of points holding the podium together. Bordeaux scored an excellent win and managed to push himself to the top of the podium. Zachary Le Vey is impossibly close, too, only about 20 points back. That same 20-point gap is what separates third, fourth and fifth place! There is a ton of shuffling going on in this top ten as Brett Holton has managed to gain three positions this week. Keep your eyes on this race, it will only get hotter in these closing weeks! These drivers are fighting for their positions, and we expect to see more upsets. It is certainly still anyone’s race!

Want to get involved in the SCCA Spec Racer Ford Challenge iRacing series presented by the Skip Barber Racing School? Click here to sign up today! New to iRacing and want to get your rig started? Check out this article on how to get started into the fast action world of sim racing, including everything from a computer spec startup guide to physically getting your sim rig ready to go! With no greasy hands and maintenance bills, online simulator racing programs such as iRacing.com offer hours of unlimited practice with a broad spectrum of to-scale tracks and cars to get you moving fast!

Below are the current standings with position, name and points.