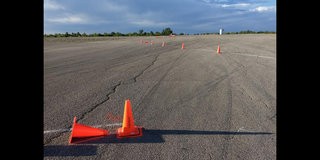 For those who didn’t blow away, the Tire Rack Mineral Wells Championship Tour was an ideal mix of barbeque, and fun driving with friends. David Whitener designed fast “chutes and ladders” courses that were both challenging and fun.  While staying clean was a challenge, drivers that could avoid the cones were rewarded handsomely on the fast and flowing courses.

In C Street, Ricky Crow led after day one and laid down competitive runs again on Sunday, but Dave Ogburn took the lead on his last run, finding 0.5 second to take the win by 0.320 second over Crow. Kenneth Baker and Tyler Kvetko claimed the remaining trophies, all four within just over a second margin.

The SCCA Women on Track initiative to promote women in motorsports is celebrating the results from Mineral Wells, as two ladies claimed open class victories. In D Street, Stephanie Reynoso came out dominating in her Civic Type R, leading by nearly a second after day one. On day two, she stretched that lead to an impressive 2.502 seconds. In H Street, it was Laura Harbour keeping it clean on day one to take the lead, and then maintaining her pace on Sunday to claim victory by just 0.084 second over Phillip Halek. As part of Women on Track, the Ladies Classes run in the same heat at Championship Tours, allowing a fair Ladies Index to be run. Claiming victory in the Ladies Index was Julie Tooth from E Street Ladies.

Street Touring Roadster once again proved that being clean is heavily rewarded as Daniel McCelvey had the raw times to claim the win but had to settle for fourth as he failed to record a clean run either day. Kerry Coughlin took the win by nearly a second over Andy Neilson. David Smart and Cameron Goode claimed third and fifth respectively to round out the trophies.