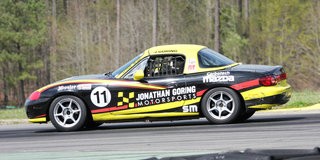 Things got exciting right from the start with the 54-car Spec Racer Ford Gen3 (SRF3) race.  Robeson Clay Russell, who won each of the six previous Hoosier Super Tour SRF3 events in which he competed, had the pole and led the first couple laps in his No. 31 Angry Llama/Comprent SCCA Enterprises SRF3.  However, he got “freight trained” by a pack of drivers using the draft after a couple laps and fell back to sixth place.  Up front, a handful of competitors swapped the lead every few laps.  Denny Stripling was first to take the helm, then Tray Ayres and Brian Schofield took their turns.

Meanwhile, Russell was able to remain in the lead pack and slowly picked off competitors one by one.  Starting the final lap, Russell was in second place.

“On the last lap, coming up on Oak Tree (turn), I stayed back a little bit because it was very critical for me to hit that turn really well.” Russell said.  “I was able to come through the turn pretty smooth, get on the throttle early and I was able to get by for the lead cresting the hill on the back straightaway going into the Roller Coaster turn. It was a tough race.”

A 42-car Spec Miata field also wowed spectators Saturday. Jim Drago led the field to the start, followed by Michael Carter, Jonathan Goring, Chris Haldeman and a gaggle of others.  Early on, the lead pack consisted of nearly a dozen cars.  But after a handful of laps, it became apparent that Carter, Goring and Haldeman were the ones in command.

Haldeman, Goring and Carter each took a turn leading the field.  As the white flag fell, Carter was in front.  But by the time the leaders popped over the ridge and plunged down the Roller Coaster to the last couple turns, it was Goring who was ahead and went on to win in his No. 11 Jonathan Goring Motorsports/Rossini Racing Products Mazda Miata. This was the first Hoosier Super Tour win for Goring, who was the 2015 Spec Miata Runoffs champion and President’s Cup recipient.

“I must say, that was pretty much one of the wildest races that I’ve driven,” Goring said afterwards. “Every driver here is good.  The competition is phenomenal, and this is why I love Spec Miata racing. It’s crazy stuff.”

On Saturday, the five car classes in Group 2 agreed to run both their races to help ease scheduling issues that could arise Sunday with the arrival of inclement weather.  The Group’s first race, however, was shortened due to multiple on-track incidents.  So when they re-emerged at day’s end for a second shot at the 3.27-mile, 18-turn course, drivers were ready for a good race.  By the end of the day’s second event, a completely new set of winners emerged in Touring 3, Touring 4, Super Touring® Lite and Super Touring® Under.  The only driver able to win both his morning and afternoon races was Touring 2 ace Kurt Rezzetano in his No. 32 Phoenix/Hawk/Hoosier/Penske Chevrolet Corvette.

“At the beginning of the day, everybody was anxious to ‘go’ like we all are the first race,” Rezzetano said. “I actually started at the back because I missed the grid, unfortunately.  But we drove through and ended up getting through the whole pack somehow.”

Also of note Saturday was the first-ever appearance of new, Runoffs-eligible Formula Enterprises 2 cars, a new class in 2018 to both the SCCA’s Hoosier Super Tour and U.S. Majors Tour®.  The very first FE2 victory went to Rhett Barkau in the No. 01 Barkau Automotive SCCA Enterprises FE2 racecar.

Fine, traditional Southern cuisine mixed with good comradery at the all-participant party brought Saturday to a close.  But when morning dawns Sunday, competition resumes at VIRginia International Raceway with events lasting no more than 35 minutes. Follow all the action live at www.scca.com/live.