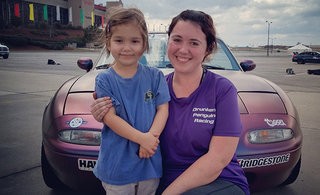 A brief bit of background: Lexie Murray is a California transplant, currently living in the greater Charlotte area. A NASCAR fan from the time she was knee high to a grasshopper, she would eventually move from the Golden State to attend school at North Carolina at Charlotte to pursue a degree in mechanical engineering with their motorsport program. Her excellent understanding of her field landed her an internship with BMW, where she fell in love with the process of manufacturing. She graduated in 2016 and went straight to work with Freightliner as a design engineer on the front-engine bus platforms. She has been with the SCCA since 2015 and is one of three ladies to receive the Wendi Allen Scholarship Fund this year. The Wendi Allen Scholarship Fund was named and established by the family of Wendi Allen, a multi-time National Solo Champion who was extremely involved with the SCCA Solo community. The fund is designed to help young women who show a passion for the sport and community by waiving the entry fees to National events, as well as the SCCA Tire Rack National Championship, along with $1500 to assist with travel and other expenses.

JH: First off, congratulations on being chosen as one of the recipients of the Wendi Allen Scholarship fund. I imagine that was extremely exciting news to get. Where were you when you first heard, and what was your initial reaction?

LM: I learned about the nomination at the Ft. Myers Pro. We were paddocked near Rick Cone, and while we were getting all settled in, he walked over and handed me a piece of paper with the nomination he written on it. I was super honored just to be nominated. I found out I was one of the recipients while working a road race at Road Atlanta. We were packing the car up, and I got a call. I couldn’t answer it, so they left a voicemail. While we were driving to go get something to eat, I checked the voicemail and it was from Howard Duncan, asking me to call him back. That’s when I got super nervous. AJ, my co-driver/crew chief/roommate, was jumping up and down in his seat, saying “this is it!” I was so nervous to call Howard back. Once we got to the restaurant, I told everyone I would be a minute, and I waited outside to make the call. That is when he informed me I had been selected, and he gave me more background about the scholarship and its history. I couldn’t be more honored to be chosen.

JH: How did you first start autocrossing? Was motorsport something you were always in to, or was it something that became a passion after you first tried it?

LM: I started autocrossing after a group effort from the Mazda Club I was part of. They had been trying to get me to come try autocross for a long time. They eventually got me to give it a shot during a two-day event there in Charlotte. I had originally only planned on doing the first day, but ended up getting hooked and doing both. And then the rest of the season. And I have been pretty involved ever since! Didn’t really have a family background in racing. At least racing ourselves. My dad was a bit of a Formula One fan, and my mom liked Indy Cars. I was the odd one that fell in love with NASCAR. So, I guess you could say I always liked racing, but I didn’t think I would be doing it myself.

JH: I see that you are an engineer. Is tinkering with/developing the car part of the enjoyment of the sport for you, or just an ends to a means to having a faster car?

LM: Apart from the social aspect of the sport, working on the car is actually my favorite part. I love being able to practically apply the theory I learned through my education to the car. I love testing and looking at the data, seeing the impact the changes had. I’ve actually been scolded by veteran drivers for changing things too much, and not focusing on the driving itself! It’s been really fun, doing all the hands-on stuff you don’t learn, or get to do, in school.

JH: With the Wendi Allen Scholarship Fund being for young or new women in our sport, and the new Women on Track initiative really taking on traction, talk to me about being a woman in your field and our sport, as both have primarily been pretty male-centric historically.

LM: Growing up and in school, you had to really work to be taken seriously. Going into school the prevailing thought was, and still kinda is, that women don’t get engineering degrees. When I came out to Charlotte to start school, my parents were told, “Don’t be surprised when she drops out,” which fueled me to work even harder. I think both men and women bring important things to the table, and I think you get a much better product through that diversity. In both motorsports and the workplace, there is no reason a woman can’t compete head to head with a man. It’s about the driver and talent. From drivers to crew to engineers to everything within the sport, there is no reason a woman can’t be successful.

JH: With that thought in mind, what would you tell the other ladies out there that are on the fence about trying autocross?

LM: Just do it! Don’t be afraid to put yourself out there and make mistakes! We all have to start somewhere. I had to make that leap, too. But once I did, so many people adopted me and showed me the ropes that I felt super welcome. And I try to do that for new people, as well. So, if you have ever had any thought of giving our sport a try, come on out! We would love for you to join us!